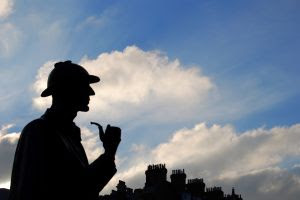 We’re all guilty of using them once in a while or more often too; in fact, clichés are a constant weapon in any writer’s arsenal. The problem with using them however is that you have to be careful not to rub your readers the wrong way – one too many of them and they’re bound to label your writing a bundle of clichés that has no originality at all. Crime writing is an especially difficult genre when it comes to avoiding clichés; it’s so full of authors who exploit them and use them even without realizing they’re doing so, and very often, they continue to enjoy success even though they resort to clichés.

But clichés are not all bad; actually, they can be quite comforting and even necessary at times, like when:

• Readers are comfortable with a certain style of writing: I hardly ever read new authors unless I’m forced to do so because I have nothing else to read. That is when I explore new options and select one person whose writing suits my taste in books. In the course of this process, I’ve found that I gravitate to a certain kind of books, those that are written in a style similar to my favourite authors. Now these new books may not have the same clichés as the old ones, but the situations are similar, as is the method of solving the crime. Come to think of it, all of us choose what we’re comfortable with when it comes to change. So when clichés cause déjà vu, they may not be all that bad.

• You have the same protagonist in all your books: If your hero is the same person (or team) in all your books, you’re bound to use clichés more often than not. Take the Perry Mason books written by Earl Stanley Gardner – Perry Mason, Della Street and Paul Drake are recurring characters, and almost every book features a case which is seemingly unwinnable at first glance, but which Mason solves with his usual ingenuity and quick wits when there are hardly any options left or time remaining. But you put up with the clichés because you know that Mason’s sense of deduction more than makes up for the rest of the banal stuff.

• You’re writing a spoof: Any self-respecting spoof (it may not respect other books, but it sure does respect itself) must be full of clichés so that readers know it is a spoof from the word go. So you’re forgiven for using them, or rather, if you don’t use them, you’re not likely to be forgiven.
So if you feel the clichés flowing from your fingers onto your screen, don’t worry too much. Just eliminate the ones that seem too obvious when you’re doing your edit and keep the rest as part of your artistic license.

This guest post is contributed by Brooklyn White, who writes on the topic of Forensic Science Technician Schools . She can be reached at brookwhite26-AT-Gmail.com.
Posted by Donna Lea Simpson at 8:01 AM